Pashmina was a villager I invited to my island without much thought. I had traveled to so many islands trying to find a new villager, and none of them were what I wanted. I was tired and decided that Pashmina would be good enough.

I’m glad I did because once she moved in, we made fast friends. Her chill vibes and caring demeanor made me feel like she was a friend who would always take care of me. She has since moved away, but I keep her picture on my wall, and she has a lovely vacation home. So she’s never too far away.

Pashmina doesn’t appear to be based on any specific breed. Goat breeds are often identified by milk, fur quality, and horn shape rather than coloration or markings. However, it would be safe to categorize her as some kind of fur-producing goat as her name is another word for cashmere, a type of goat wool produced in mountainous areas.

One of my favorite parts of Pashmina’s designs is her color palette. She is primarily warm earthy colors with a red-brown coat and light brown accents on the snout, arms, and eyes. This makes the brighter colors pop, like the rainbows on her default sweater and bright aqua horns.

Pashmina’s eyes are a deep yellow and are usually half-lidded with luscious eyelashes. They give her a look of cool indifference like she can’t be bothered. Her mouth and nose are relatively small, also lending themselves to subtle expressions.

Her warm brown hair is cut in a straight bang style. It makes her look bold yet in control. She’s brave enough to rock those bangs, but they don’t need to be overly styled. Simple yet striking is the style that Pashmina rocks with seemingly no effort.

As a sisterly villager, Pashmina acts a bit older than the other villagers. She reminisces about her past and the lessons she learned in her youth. When you talk to her, there’s a good chance she’ll give you some personal wisdom, whether you ask for it or not.

You can always count on Pashmina to be a voice of reason. She isn’t fooled by any grand fantasies and prefers to keep her feet on the ground. Of course, she still likes playing with the other villagers.

When it comes to you can other villagers, Pashmina might not seem immediately friendly. It takes a little time for her to warm up to someone, but as you get to know her, you realize she expresses her care subtly. Unlike some other, more energetic villagers, Pashmina expresses herself quietly. Once you understand her, you’ll see how much she cares.

In her free time, Pashmina likes to enjoy music and cooking. She’s fully prepared to give someone a lovely meal any time and takes great care to ensure they eat well. When she’s listening to music, she likes something with a funky melody and upbeat rhythm. Even when relaxing, she doesn’t want anything slow or boring.

Since Pashmina’s first appearance was in New Leaf, she has had two house designs. One from each main series game she’s appeared in. Every villager gets some changes to their house when entering a new game. However, the difference can vary from a few pieces of furniture to an entirely different theme. Pashmina is in the latter category.

In New Leaf, Pashmina’s house was rather posh, leaning into her elegant tastes. Her room looks like it would fit nicely into a vast mansion. The colors are dark and rich, with lattice walls and a red rug floor.

Fittingly, furniture from the rococo series makes up most of her decorations. Her bed, sofa, table, lamp, and dresser are all adorned with intricate floral designs and gold metalwork, fitting an elegant theme. Her interest in music is also evident. There is a music stand next to a bass and a violin by one window. There’s even a gyroid to dance to the music she plays herself or on her retro stereo.

The exterior of Pashmina’s house is very fitting. The dark red roof compliments the white siding and pale pink door. The wood trimming and solid, square shape makes the house look grounded and practical. Especially when compared to the other colorful and strangely shaped houses in New Leaf. It really communicated Pashmina’s grounded personality.

Then we move to New Horizons, and Pashmina’s house gets a complete makeover. Rather than leaning into her elegant tastes, the house goes hard on the color red and makes the whole thing look a bit cooler, another of Pashmina’s sensibilities.

The entire interior of the house is decorated with red furniture. Most of it is from the diner series, and the rest matches by being either kitchen supplies or looks like it’s straight out of the 50s. It makes me feel like I could walk in and eat a greasy hamburger while listening to rock’n’roll.

Oddly enough, the house’s exterior doesn’t reflect the interior. There isn’t a hint of red. The colors are all pretty muted, with a dull orang-brown roof and a blue door. It doesn’t look too bad and is fairly grounded, like the New Leaf home, but it seems strange with the searing red interior.

There are many ways to increase your friendship level with villagers: talking to them, taking their requests, and visiting them. However, the fastest way to boost your friendship is by giving gifts. You can give each villager one gift every day and, provided that it isn’t junk, their level will increase to varying degrees.

How much their level increases depends on what kind of item you give them and how much they like it. Giving them smaller, cheap things, like flowers, crafting supplies, or fruit, will only increase a little. Larger items like furniture, clothing, and fossils will have a greater impact. You can give them furniture or clothing that matches their favorite colors and styles to get the greatest boost. In the case of Pashmina, her favorite styles are elegant and cool, and her favorite colors are red and colorful.

When I give my villagers gifts, I like to give them clothing. It makes them feel much more alive when they have a larger selection of clothes to wear rather than being limited to their default clothing. It’s fun to give them a variety of accessories as well to see what kind of outfits they’ll put together. These are the clothes that I found work best on Pashmina.

Gifting furniture can be a bit trickier than clothing. Your villager will most likely put your gift somewhere in their house. This removes an old piece of furniture and replaces it with something new that may match their interests but not their existing decorations. You have to be careful about how much furniture you give them and what kind so you don’t ruin their homes. Pashmina’s house has a very strong theme, so here are some ideas that will work with it.

If you are still uncertain about what to give Pashmina but still want to increase your friendship level, then I have a tip. You can give fossils to villagers, and they will count as something the villagers like, no matter what kind of fossil it is. The best part is, if you give them a large fossil, it will never appear in their house. That way, you have a steady stream of free gifts to give that your villagers will like without the risk of looking weird later on.

Should You Invite Pashmina to Your Island?

When figuring out if a villager should move to your island, the answer will ultimately be up to you. No villager is better than any other and whether or not you will like them is entirely up to your personal tastes. However, it can be hard to decide based on an initial impression. There have been plenty of villagers I didn’t care for initially but came to love over time.

Since Pashmina doesn’t immediately appear to have one solid aesthetic or theme, she could fit into most islands. Her house is another story, but it could be changed into something more subdued with the Happy Home Paradise DLC. That way, she can blend into most themes that don’t require something grand or fantastical.

The way she is now, though, I recommend her to anyone looking for a villager for something homey and nostalgic. If you’re a fan of older furniture, like the retro or throwback sets, and like villagers that aren’t super bright colors, then Pashmina would be perfect. She would fit so well in an island themed to be a 50s town or some little pit stop in the middle of nowhere.

Pashmina’s card features her standing in a sassy pose, with her hoof on her hip and all her weight on one leg. The background is a bright orange that distracts from Pashmina’s less saturated color palette. Her card number is 331, and the symbol accompanying it is the open hand.

The card was introduced in the fourth Animal Crossing amiibo series. This series came out in 2016 and included other characters like Celeste, Redd, Goldie, Zucker, and Lucky.

Pashmina may not be the most memorable or popular villager, but she should be appreciated for her simplicity. Not every villager should be rainbow-colored or look like they stepped out of a fantasy world. Some people like simple designs, and I’m one of them.

While not one of my dreamies, I have a deep appreciation for Pashmina, and I look fondly back at the time I spent with her on my island. She’s kind, caring, and chill. For anyone else looking for a simple villager with a fun house, I hope that Pashmina will make an appearance on your island too.

Question: What animal is Pashmina in Animal Crossing New Horizons?

Answer: Pashmina is a goat. Some villagers depict more specific breeds of their species, mostly birds and dogs, but the goats don’t tend to do that. Goat breeds aren’t super distinguishable by the average person. The goat model in Animal Crossing doesn’t lend itself to looking like other animals. So we can’t get much more specific with Pashmina than just goat.

Question: What kind of villager is Pashmina?

Answer: Pashmina is a sisterly goat villager. Her personality type is characterized by being chill and laid-back. They don’t act old, like Cranky villagers, but definitely seem to be older than the player.

Answer: No, Pashmina isn’t particularly popular. Her design is rather basic, and she isn’t new, so she doesn’t receive much attention, good or bad.

Question: Is Pashmina a good villager?

Answer: I would say yes. I think Pashmina is a good villager. However, no villager is good or bad in Animal Crossing since they all act the same way on a meta-game level. Whether or not a villager is good is entirely personal. The only person that can answer this question for you is you. 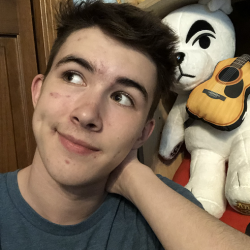 Mika Zans
Mika has been a gamer for as long as he can remember, with Pokemon being his gateway game that has created a lifelong addiction. Since then Mika has gravitated towards the more chilled-out and relaxed games out there like Animal Crossing, Stardew Valley, and Harvest Moon to name a few. Outside of his love for gaming, Mika is an avid collector and spends an extortionate amount of cash on Build-a-Bears, plushies and action figures!