There’s nothing like playing Animal Crossing and catching up with your villagers! The delightful catchphrases and wholesome dialogue provide a calming effect, making me return for more gameplay to destress.

Some villagers are more relatable than others. Cranston, in particular, is one I adore most due to his easygoing personality and laidback lifestyle. Continue reading to find out more about this charming fellow!

An Intro To Cranston

According to the Animal Crossing: New Horizons Official Companion Guide, Cranston is an ostrich. However, he resembles a sandhill crane. In that case, the name “Cranston” might come from the word “crane.” Cranston’s Japanese name, トキオ (Tokio), is also a reference to the Japanese crested ibis. That’s no surprise since his character design fits the ibis perfectly.

The “ostrich” category of villagers is confusing because most of these villagers look like other birds, such as flamingos and storks. In my opinion, the creators should have labeled them as “large birds” instead.

Take a look at these basic facts about Cranston:

Cranston’s character design is simple yet memorable. He is generally white with light pink feathers at the base of his tail and the tips of his wings. Cranston also has three large, white feathers protruding from the back of his head, which represents the crest of the Japanese crested ibis. On top of that, he has a unique red spot at the tip of his beak, and dark pink stripes on his adorable light pink legs.

This bird’s greatest features are his gigantic, yellow eyes framed by red feathers. It seems like Cranston is gazing into your soul every time you chat with him, but he’s probably just contemplating what he’ll have for dinner.

A whopping 12 ostriches dwell in the Animal Crossing: News Horizons world! Cranston is the only lazy one, making him a rare catch. As a laidback villager, he enjoys being around funny individuals. Therefore, telling Cranston hilarious jokes is a quick way to befriend him. Cranston also goes to bed at 11:00 p.m. and wakes up at 8:00 a.m. every day in New Horizons.

Lazy residents constantly profess their love for food, and Cranston is no different from the rest of them. He frequently rants about his favorite snack when I talk to him. I thought this would get irritating after a while, but Cranston’s passion for food is the epitome of innocence. Besides, we can all relate to this bird’s love for delicious meals.

When Cranston isn’t talking about food, he’s talking about bugs. In fact, it seems he’s befriended the creepy crawlies in his home. Cranston cares about them so much that he sent me a costume through the mail because it scared his bug friends. Although this attachment to insects is a bit strange, I can’t help but admire his compassion.

Cranston’s affection for bugs suits his nature hobby. I often find him reading about bugs, fishes, flowers, and fossils when I visit his house. Cranston will also examine bugs, trees, and plants when he’s outside.

The lazy ones are some of the best villagers since they typically click with other personalities. However, they tend to clash with jock and snooty characters. Jocks pride themselves on their dedication to exercise, so they detest the lifestyle of lazy villagers. Snooty villagers also highly value their appearances, and sometimes they can’t fathom why lazy villagers don’t feel the same.

What Should I Gift Cranston?

If you’d like to impress Cranston, be sure to gift him things that are simple, cool, beige, or brown!

Don’t know where to start? These items are sure to do the trick:

In New Leaf, his home gives off outdoor vibes, contrasting his home in New Horizons.

The idea of an outdoor-themed interior is interesting, but these items don’t compliment each other well. The place looks like it was thrown together by a child, and I wish there were more cohesion.

The bird adopts the stunning Imperial collection, making an extravagant adjustment to his home.

Take a look at what’s inside his zen approach to decoration:

Cranston’s home is one of my favorites. It’s elegant and simple, which suits his style perfectly. The layout of the furniture could be more practical. For example, I think the low table should be parallel to the TV, and there should be a chair facing the TV so Cranston can comfortably catch up on his beloved sitcoms!

Although I admire Cranston’s default home, it’s entirely different on my island. He uses the DIY Log series to decorate his house on my island.

This version of Cranston’s home has:

Since Cranston is one of my first three villagers, his home design is basic. I like the coziness of this version of Cranston’s house, but I’m also bored of it since the furniture is ordinary. Fortunately, you can redecorate a villager’s home by completing the Animal Crossing: New Horizons DLC and complaining to Isabelle about the resident’s house.

Like many other residents, you can earn Cranston as a villager in Pocket Camp. Once you obtain his villager map from Gulliver, complete Blather’s Treasure Trek to welcome this loveable bird to your campsite! Cranston’s style is harmonious and mainly gives steel as a present.

As your friendship with him increases, you’ll receive the following:

One of the best updates to Animal Crossing: New Horizons is the addition of Happy Home Paradise! Cranston’s vision in the DLC is a Nice Rice Paradise where he wants to indulge himself with rice dishes.

Go crazy with your interior design skills, but be sure to include these items:

It may be challenging to find Cranston-themed merchandise since he isn’t popular. Nonetheless, you can start your search with these items I found on Redbubble and Etsy!

This Cranston T-shirt made by Enchanted Animal is simple and cool, much like Cranston’s style! It features this bird with a bright smile and the iconic Animal Crossing leaf in the background for only $23.60. The print location can also be on the back or front of the shirt. This shirt also comes in 18 colors, from sizes small to 3XL. I’d personally choose the orange shirt since it matches the color scheme of the print best!

Emma D, another Redbubble user, sells this Cranston iPhone case! On this cover, the ostrich wears his Oversized Shawl Overshirt while blankly staring off into the distance. The background is navy blue with random shapes in different colors, giving the case an artistic look. The shop owner also lets you choose a case style that suits you! Soft cases cost $25.03, snap cases cost $30.08, and tough ones cost $36.11. The best part is the owner makes cases for older iPhone models, like the iPhone 4S, and newer ones!

My favorite item is this Cranston 3D Printed Figure I found on ArtisticTouchPrints’ Etsy profile. This 4-inch figure depicts Cranston gleefully raising his wings in the air while wearing his famous Lotus Tee. A painted figure of this ostrich costs $30.00, and an unpainted one costs only $20.00. This item could make an extraordinary gift to anyone who cherishes Cranston! 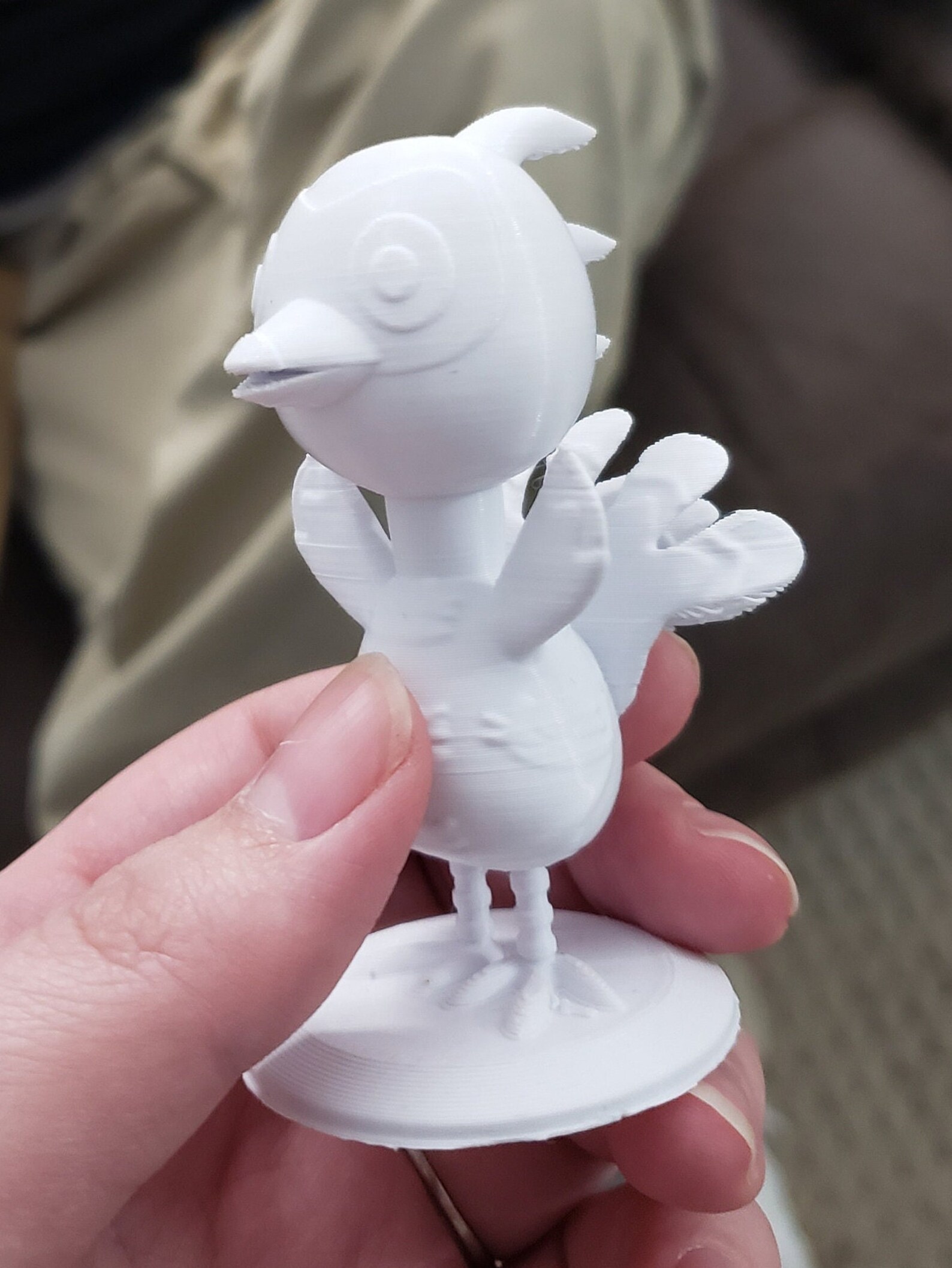 Answer: Many players report lazy villagers breaking the fourth wall. They’ll go on a rant, telling the player everything is fake, and the town exists for people’s amusement. Then, the lazy residents will say they were kidding and continue with their lives. Let’s hope they never find out the truth.

Question: What is Cranston’s Goal?

Answer: Cranston is an aspiring CEO. That doesn’t sound like the ambition of a lazy villager to me!

Answer: Here’s the perfect cup of coffee for Cranston:
Type of Beans: Blend
Amount of Milk: None
Amount of Sugar: None

Question: Does Cranston Have an Amiibo Card?

Although people overlook Cranston, there’s a lot to love about this lazy ostrich. Cranston’s fixation with food is endearing, and all of us can learn from his chill lifestyle. He reminds us to relax occasionally, and there’s nothing wrong with that!

CaLea Johnson
CaLea has been gaming since she was a child. Now, she combines her love for gaming and writing by creating reviews, guides, and news stories about her favorite franchises! Her all-time favorite is Animal Crossing and she loves nothing more than showing of her island to anyone that will pop in and visit.